What is a Thrust Bearing - White Paper

Bearings literally make the world go round.  They are called “bearings” because they “bear” the stress of an application’s moving parts.

This paper is on Axial Bearings, also known as Thrust Bearings. Thrust bearings create a force that is parallel to the axis, meaning the force is pushing against the bearing. There are many thrust bearing applications, but the primary application separates a rotating load from a non-rotating surface. Some examples: supporting a rotary table or absorbing the thrust of a boat’s or airplane’s propeller. 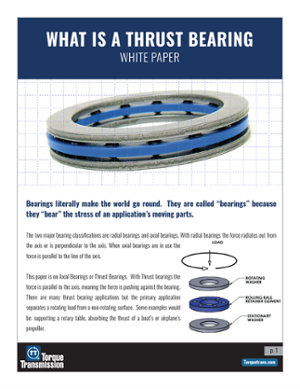