About our Variable Speed Pulleys

To understand how variable speed pulleys work, it is first important to know what they are intended to do. The purpose of a variable-speed pulley is changing the revolutions per minute (rpm) on a rotating shaft—either speeding them up or slowing them down

The drive shaft is the power source, like a motor; it also turns at high speeds. The driven shaft requires an increase or decrease in speed—this happens by way of another component called a belt that transfers the power from one to the other.

The variable speed pulley has one or two movable flanges that are closed by spring pressure.

There are two types of variable speed pulley systems.

Movable shaft center distance:  As the moving motor base increases the distance between its two shafts, it moves a belt that engages with a variable-speed pulley.  At extreme positions of flange separation (maximum and minimum pitch diameters PD and pd), no belt engagement takes place.

The speed range of variable-speed pulleys is nearly infinite, within standard ratio limits. Our pulleys offer an economical alternative for many applications that may not require the expense of AC/DC variable speed motors and controllers. Our variable-speed pulleys are designed for belt sizes from 1/4" V (variable) to 5/8", and horsepower ratings between 1/12 HP and 1HP. 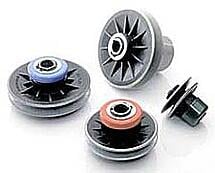 Variable Speed Pulleys on our Blog